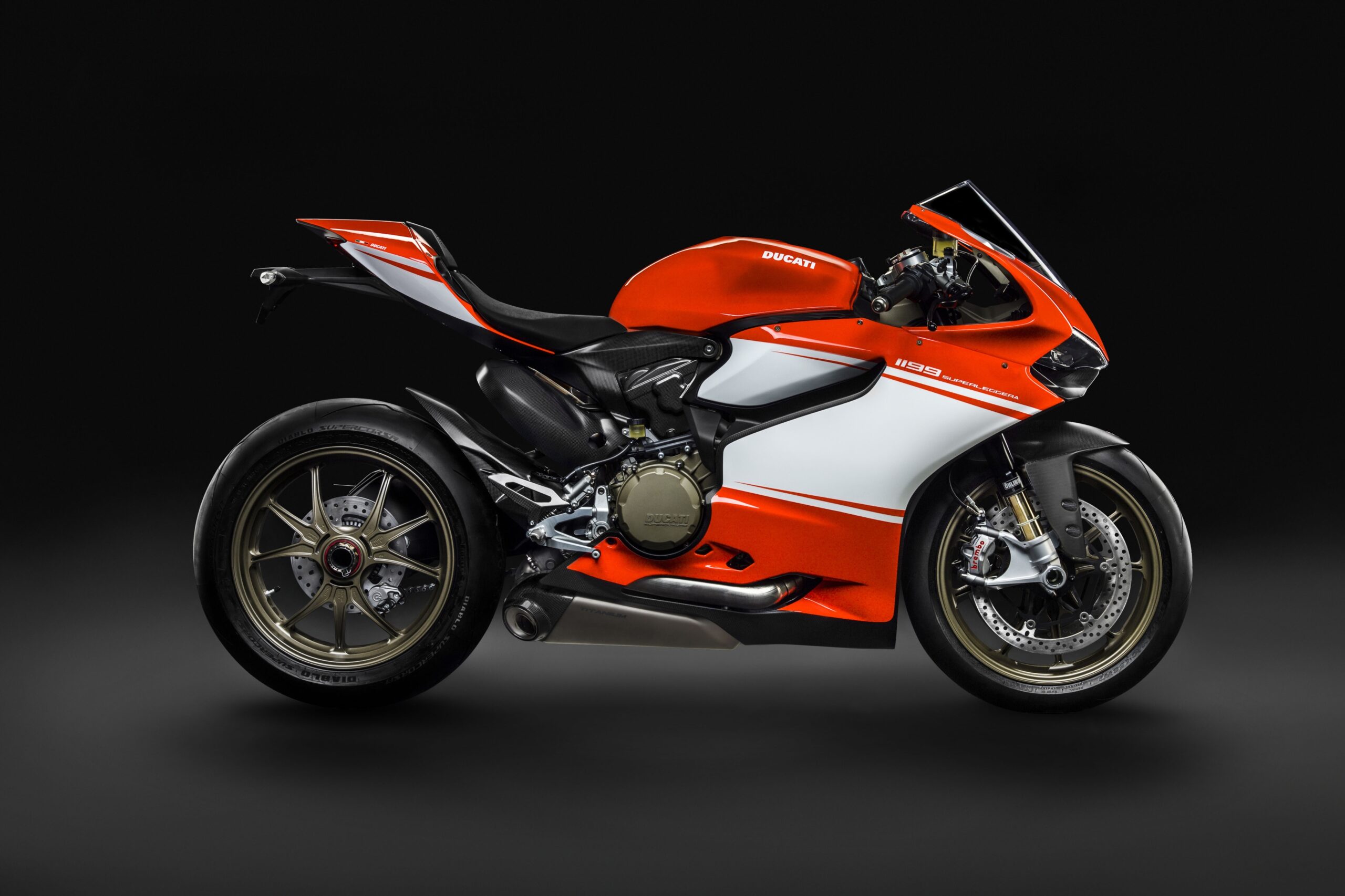 The London Concours, presented by Montres Breguet, has announced that this June’s event will feature a selection of two wheeled stars from the most iconic and evocative motorcycle brand of all, with its ‘Ode to Ducati’. Spanning close to 50 years of the Italian marque’s illustrious history, the remarkable collection of bikes will wow alongside the Concours’ breath-taking array of four wheeled machinery – from spectacular supercars to the finest classics – on the immaculate lawns of the Honourable Artillery Company in the heart of the City.

The wonderful selection of motorcycles from the Bolognese manufacturer will include an example of the rare 750 GT ‘Sandacst’ from late 1971. The bike, Ducati’s first v-twin cylinder machine, was born when Fabio Taglione, or “Dr. T” – Ducati’s longstanding chief designer and technical director – was tasked with building a 750 class bike to compete with the likes of Moto Guzzi, Laverda and of course the Japanese giants. The move into the 750 class was viewed as crucial to the success of the marque; a gateway to significant sales volumes in the USA. Taglione’s proposed low-cost solution was to blend two of Ducati’s well proven small capacity ‘singles’ onto a common crank case, creating a 90-degree V, or “L Twin” as he termed it. The 750 GT, widely praised by journalists in period for its smooth power and sharp handling, represents the genesis of Ducati’s illustrious lineage of V-Twin machines. In order to get production going as quickly as possible, the very early bikes had engines with sandcast cases and many other detail features not seen on the series production machines, which featured die-cast motors. Just 400 out of a total production of some 4,000 GTs were built this way before the revised “square cased” engine was introduced in 1975. Relatively few of these early bikes have survived, with a small handful at most to be found in the UK. One not to miss. 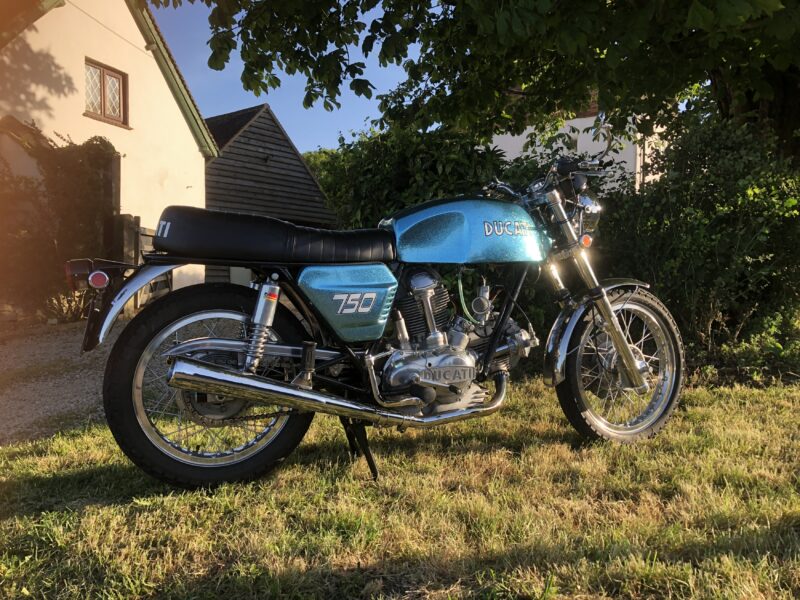 This summer’s show will feature another ‘70s 750 – the Super Sport, or “Imola Replica” dating from 1974. This, the very first Ducati SS was conceived as a road going version of the race bike that made a stunning debut with the late, great Paul Smart on board, winning the famed 1972 Imola 200 on its first outing. With Smart’s teammate Bruno Spaggiari taking a close second place, Ducati found themselves catapulted from an unknown producer of lightweight single cylinder motorcycles to a major name on the world map of exotic sports machinery. Unsurprisingly, Ducati management, not least ‘Dr T’ were keen to build on this seismic victory with a road-going replica of the winning bike. A limited run of Imola replicas were sanctioned, the first prototypes emerging in late 1973. Following on from the prototypes, just 401 examples of the ‘Replica’ were ‘batch built’ in the spring of 1974 – all under the direct supervision of Taglione in Ducati’s race shop. At a heady £1650, the SS came in at 50% more than Kawasaki’s mighty Z1. The 750 SS on display this June was one of perhaps 25 bikes at most delivered new to the UK – shipped to its first owner by air freight – and has been cherished ever since by a total of just four owners in 48 years. Often referred to as the “green frame” these 401 bikes were the only round case Ducatis to leave the factory with the iconic “Desmodromic” cylinder heads. 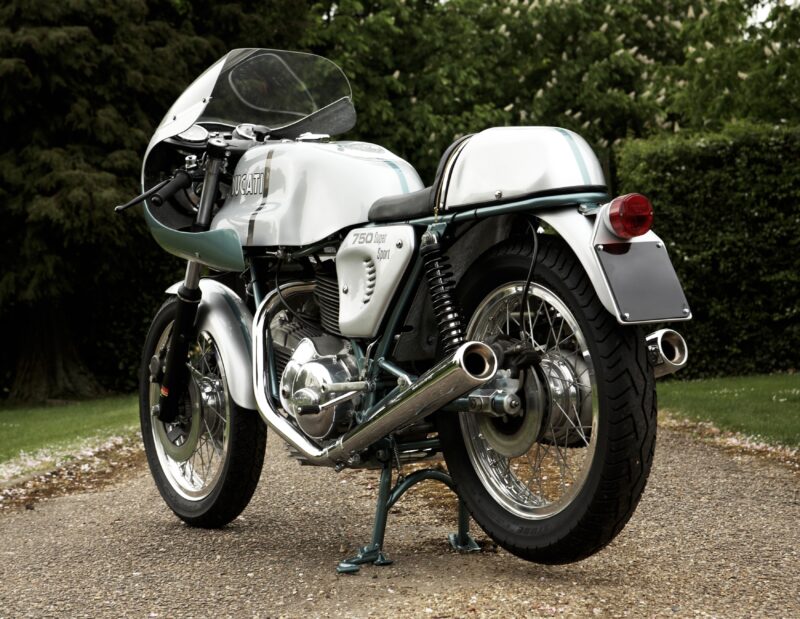 The Honourable Artillery Company will play host to another ‘racing replica’: a 1980 Ducati 900 MHR. The bike is closely affiliated to one of, if not the, greatest racers of all – “Mike the bike” Hailwood. At the age of 38, 11 years after retiring, Hailwood made a comeback appearance at the Isle of Man TT in the Formula 1 class. Riding a modified and specially prepared 900 SS Ducati, he won the 1978 race. This burnished his already god-like reputation among fans, and prompted Ducati to introduce what would become their best-selling bike of the late 70s and early 80s: the 900 “Replica” or MHR. The MHR that will be on display at the HAC this June recently made a pilgrimage to the Isle of Man for the Classic TT, following in Hailwood’s tyre tracks 40 years on from his stunning victory. Much of the credit for the race preparation for the 1978 race goes to Steve Wynne of Sports Motorcycles in Manchester. It’s a source of great satisfaction to the owner of all the bikes on show that it was none other than Steve Wynne who rebuilt the engine and cosmetically refreshed the 1974 750 SS “green frame” also on display. 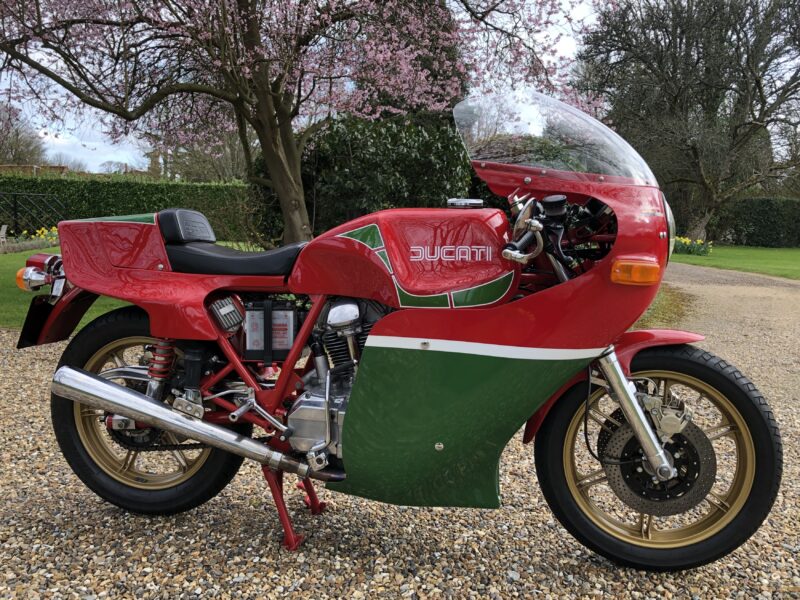 A Ducati from the late 1980s will also be amongst the bikes on display, an 851 Kit Racer from 1988 – a fuel injected, water-cooled four-valve machine that moved the game on significantly for Ducati sports bikes. The 851 featured an evolved version of Ducati’s two valve, air-cooled ‘Pantah’ engine, revised by its original designer, Massimo Bordi, with a little help from a famed British engineering firm Cosworth. The resulting power plant laid the foundations for 30 years or more of Ducati Superbikes. The road going variant, the “Strada” was initially criticised for its unusual steering characteristics – on account of its 16” wheels – and lack of firepower when compared with Honda’s RC30. The ‘Kit’ rectified things, with power boosted to 120bhp, larger 17-inch magnesium wheels, a braced swinging arm and a close ratio gearbox, amongst other race shop only features. Only 207 examples were built, and the Kit Racer is viewed by some as the most thrilling and visceral of all Ducati’s sports bikes. 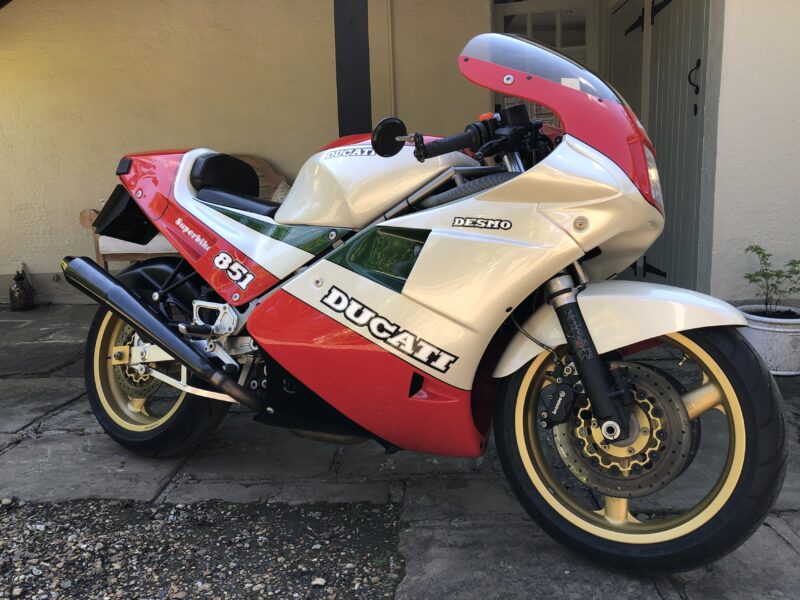 This June’s event will also host more modern machinery, including the Ducati D-16 RR of 2008. The 1000cc, four-cylinder D-16 RR – modelled on Ducati’s GP6 Moto GP racer – was a real weapon, offered only to select customers, promising nigh-on Moto GP performance for the road. In the view of the late, highly respected journalist Kevin Ash, Ducati delivered on this promise. Packing a 200bhp V4 (with four valves per cylinder and four cylinders, hence ‘Desmo- 16’) and revving to 14,000 rpm, the D-16 Race Replica offered a lucky few a glimpse of what it was like to pilot a Gibernau or Capirossi factory race Ducati of the period. 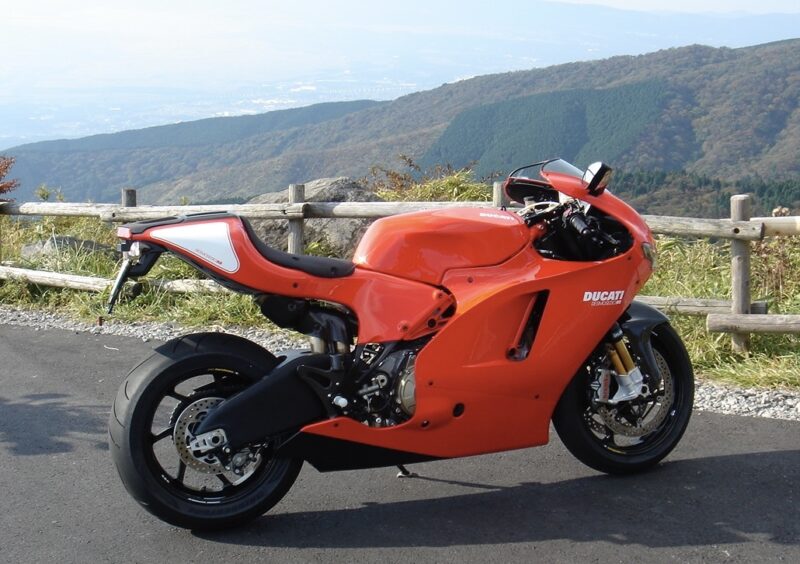 The collection of superb Ducatis will also include the 1199 Superlegerra of 2014 – the bike that heralded the end of the road for Ducati’s long line of twin cylinder superbikes. Whilst the v-twin is still found today in Ducati’s middleweight and sports touring models, Ducati waved goodbye to the v-twin Superbike with these exclusive limited-edition models. The Borgo Panegale factory pulled out all the stops, producing two batches of super exclusive “Superlight” ‘twins’ – the 1199 of 2014, and the 1299 of the following year. Just 500 numbered examples of each were delivered worldwide. The 1199 SL that will star at this June’s event retailed at £60,000, produced an eye watering 205bhp, and weighed just 155kg dry – a weight more typical for a 500 or 600cc middleweight sports bike. Packed with the latest in technology and rare materials such as magnesium, carbon fibre and even tungsten – the latter used for components within the engine – the SL was a furious performer. Autocar underscored just how furious by substituting an 1199 SL for a Ferrari La Ferrari when carrying out a supercar test with the McLaren P1 and Porsche 918. The Superleggera matched the 903bhp McLaren P1 and Porsche’s 918 right up to 180mph, even pulling ahead after a standing start, before the cars’ slippery aerodynamics and longer gearing gave them an edge. A rare opportunity to witness this remarkable machine in the metal. 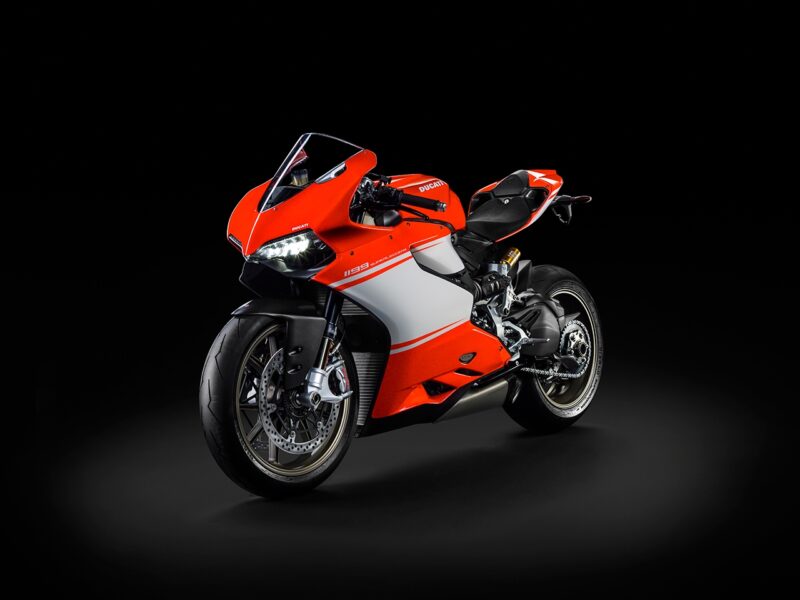 These dramatic Ducatis, and more, will be on show at the Honourable Artillery Company this June, at the capital’s ultimate automotive extravaganza. Carl Fogarty, the 4x World Superbike Champion and Ducati Brand Ambassador, will also make an appearance, on behalf of Bikesure, the ‘Ode to Ducati’ class co-sponsor. Fogarty will be chatting with Dave Vitty and Jason Plato, from the Fuelling Around podcast on Wednesday 29th June.